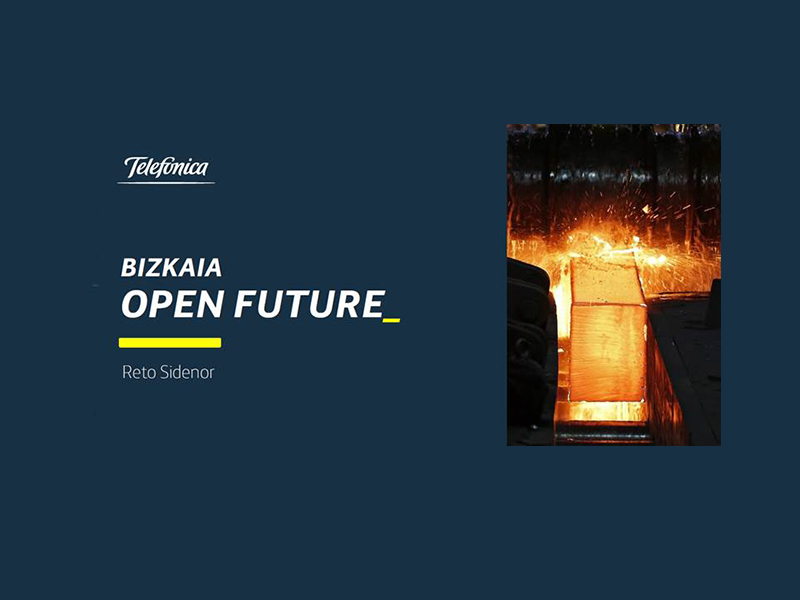 The contest is open to any entrepenneur, start-up, SME, university or technological centre.

The winner will carry out a real pilot of his/her project, whose cost will be borne by Sidenor, and have the possibility of obtaining a monetary prize as well as access to aids from the Regional Government of Bizkaia, provided that the relevant conditions are met.

Bilbao, May 28th.- Sidenor launches a technological contest aiming at optimising its production processes by implementing new technologies, within the framework of Bizkaia Open Future, in its development up to digital transformation. Sidenor, a leading European steel company, has relied on the initiative supported by the Bizkaia Provincial Council and Telefónica in order to search, in the ecosystem of entrepreneurship, start-ups, SMEs, universities and technological centres, a solution based on new technologies and aiming at optimising its production process.

The winner of this contest, which has been launched through Telefónica’s global platform Open Future_, will be awarded the opportunity to carry out a real pilot of its project, whose cost will be borne by Sidenor, a monetary prize of 15,000 euros and access to aids from the Regional Government of Bizkaia, provided that the relevant conditions are met. The deadline for the submission of applications for the contest of Sidenor, within the framework of Bizkaia Open Future_ and designed by the steel company with regard to its digital transformation and with the purpose of optimising its production processes, starts today and will end on June 28th at bizkaia.openfuture.org

But… what is Bizkaia Open Future?:

Bizkaia Open Future is an initiative of the Regional Government of Bizkaia and Telefónica, which aims at supporting the industrial sector of Bizkaia in its digital transformation. This programme is intended for the overall industry and has positioned itself as the connection point between the new local as well as international entrepreneurial talent and the region’s industrial companies.

Bizkaia Open Future’s renewed proposal is now launching the first of its five planned contests. For its first edition, five benchmark companies in the territory received, through this open innovation programme, 155 proposals from Euskadi, the rest of the country and abroad. It has also contributed to the acceleration of five start-ups and the support of ten SMEs selected for the innovation process in new business models, as well as various awareness-raising and training programmes.

New to this edition, in addition to the five open innovation contests launched by Bizkaia’s benchmark companies, the commercial acceleration programme for technological start-ups and SMEs is being implemented at an advanced level of maturity. Telefónica will help these structures to develop and strengthen their business project by joining the multinational company’s technological offer.

Telefónica Open Future is a global platform aiming at connecting entrepreneurs, start-ups, investors as well as public and private partners from all over the world in order to attract innovation and business opportunities. Its purpose is to support talent at all its growth stages by means of a comprehensive acceleration and connection model with organisations, investors and companies. So far, investments have been made in more than 800 start-ups in 16 countries.

More information is available at: https://www.openfuture.org

Previous post Do you know the CE marking for the manufacture of steel aggregates?